Tour Unite route was splitted into 6 segments. This page provides short information about them. Click links below and follow to our main site (in Russian) for actual GPS tracks, additional descriptions, useful links, interviews and ride reports.

Please, note that downloaded track can be displayed incorrectly on your navigation device. Some GPS navigators have maximum track point limit, that means some part of downloaded track might be cut off by device. When splitting the track into pieces in special programs or online services, the number of track points may decrease, which may lead to track display inaccuracy and some inconveniences. After converting the gpx file of the track to the kml format and uploading it to the bike computer, changes in the track and incorrect navigation may appear. Please pay attention to this.

To describe difficulty of each segment we introduced difficulty level grade. Number on the grade depends on multiple factors taken into consideration: wilderness and remoteness, road types, length and altitude gain.

Easy segment is suitable for beginners and demands some preparation and touring experience.

Medium difficulty segment is for seasoned bikepackers, it demands ultradistance experience and race taring. Could be toured in easy mode, but make sure it's not your first bike tour.

Hard segment is for tough riders with solo multi-day wilderness experience. Roads can be unrideable, weather can be threatening, nearest help can be day or two away. 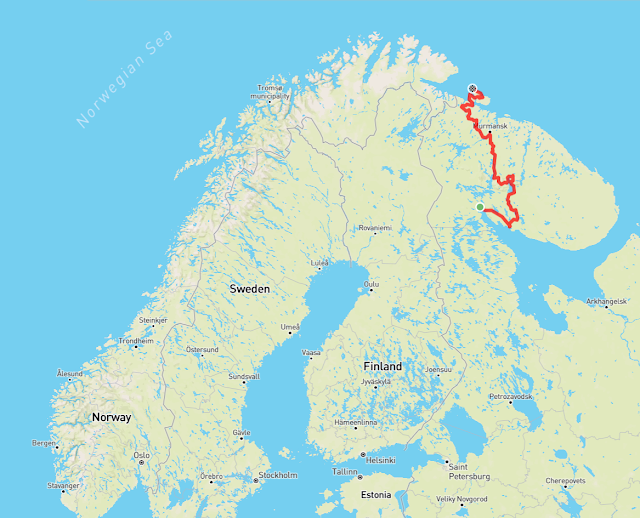 Alternative name for the segment is "Kola" since it crosses Kola peninsula from north to south. Whole segment is situated beyond the Arctic Circle. That means tundra, polar day and lots of blood-sucking insects during summer. The segment is rideable only in summer, there is snow in spring and autumn. There are couple of rivers and lakes on the track that can be crossed on foot, but water level is weather dependable and water flow could be dangerous. In high water season some water passes became unfordable. Roads are hard, with pools of water and big boulders. Don't forget about Khibiny mountains and one summit. Snow and gusts of cold wind aren't rare here even during summer. Usually you need to prepare for cold and wet weather conditions, but you can find yourself very surprised in 30 °C heat with no precipitation for a week. As a cherry on top: there could be military exercises and maneuvers announced in northern part of the track at Rybachy and Sredny peninsulas. In this case riding on track could be life-treating. Military patrol won't let you to the territory, and if you somehow will sneak into, they forcibly evacuate you from the exercise area. 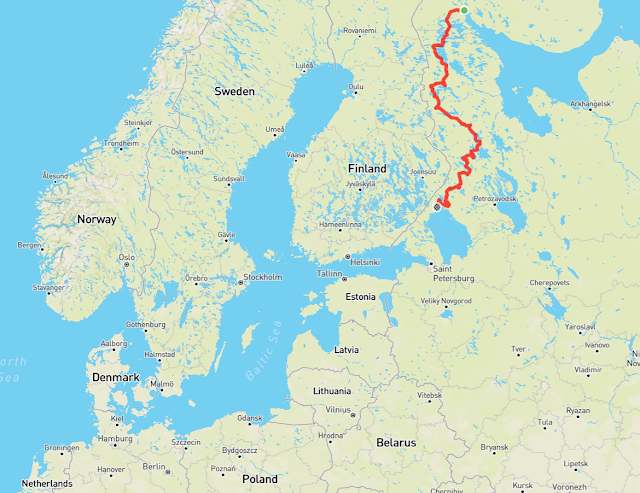 Alternative name for the segment is "Karelian" since the most part of the track runs across Republic of Karelia. Segment characterizes as a taiga (boreal forest) with lots of different quality gravel roads. There are more people and resupply points there compared to Kola segment, but still you can ride for couple of days before you meet anyone. The main inevitable obstacle is Kundozero lake crossing near the Kumskaya Hydroelectric Power Station. You'll need a pacraft for that. You have two route options at lake Pya: pass it from the west through Paanajärvi National Park (preliminary registration and payment requiered) without water crossing, or pass it from the east and cross Kundozerka river near Zasheyek on pacraft. It is also OK if you wish to pacraft with your bike from Zasheyek to Kumskaya Hydroelectric Power Station — no water crossing nedded other than this section of the route, you can send home your pacraft later at nearest town. 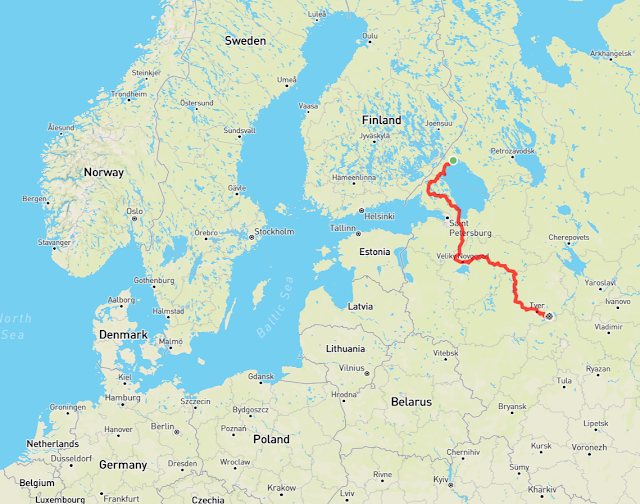 Alternative name for the segment is "Vyshnevolotsky" [vɨʂnʲevolot͡skʲij] since the most part of the track follows old Vyshnevolotsky Water Way — first artificial waterway in Russia. The most popular and most weatherproof segment. Resupply options at least once a day. Well populated area, but not too crowded, with plenty of beautiful landscapes. Good logistics from Moscow and Saint-Petersburg, two largest cities in Russia. Northern part of the track follows Ladoga lake and Karelian Isthmus with gravel roads and a pinch of sand tracks. Central part of the track passes through Veliky Novgorod and it's UNESCO World Heritage historic monuments, here you can find a lot of asphalt roads, a bit of gravel roads and some forest double tracks. Southern part of the track runs through combination of paved and unpaved roads across rural countryside and historical towns. 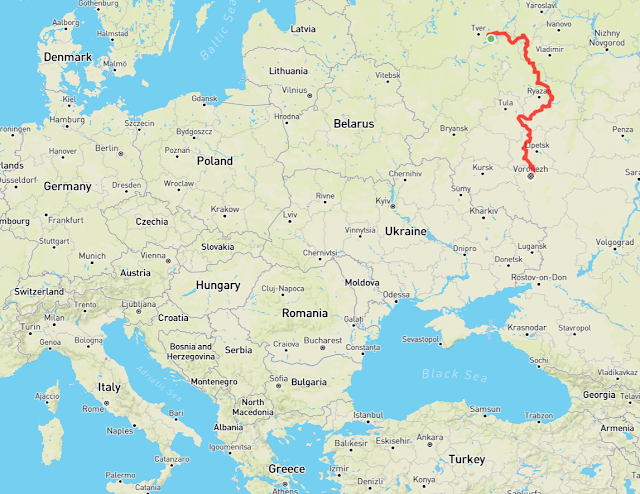 Alternative name for the segment is "Central" because it represents central region and close to the capital. Crowded Moscow area bypassed from the east. Northerner half of the track goes through mixed forests and sandy cone-forested Meschera. Southern half of the track goes through agricultural lands and forest-steppe landscapes. Here you can stuck in rich muddy sticky soil when it is wet. But we tried our best to make this weather dependable parts short and passable on foot within 2 hours. 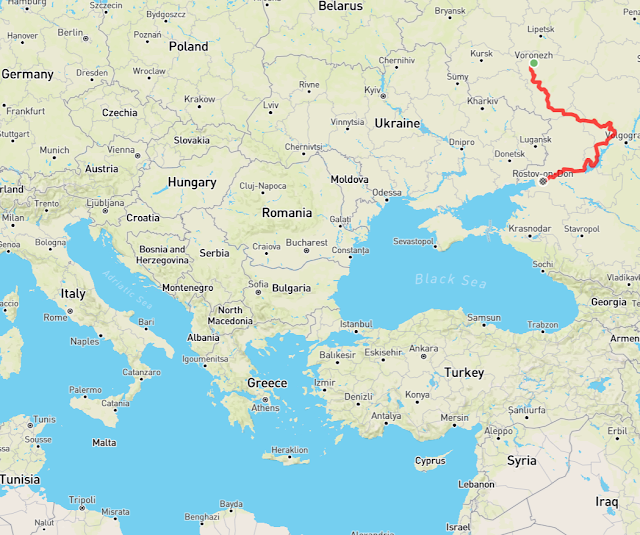 Alternative name for the segment is "Donskoy" because it follows Don river. Here you can find hills, steppe and small desert called Natural park "Tsimljansky sand". For this segment tubeless tires are mandatory due to lots of thorns. During summer and early fall day temperatures could by high, all the way up to 40 °C. In wet conditions unpaved roads could get sticky, because it is mainly chalk and clay soils, and of course there is "chernozem". 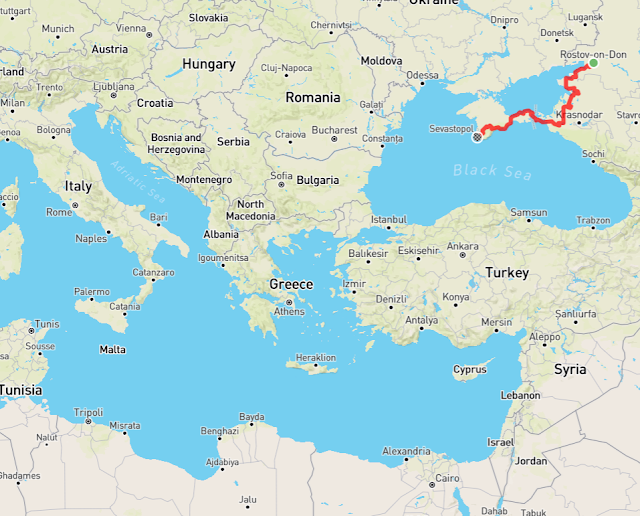 Alternative name for the segment is "Southern". Southern half consists of flat and paved roads, northern half runs trough Crimean hills and mountains with lots of climbs and dirt roads. Roads in Crimea are weather dependable. During summer you can face scorching hot weather and lack of ground water.